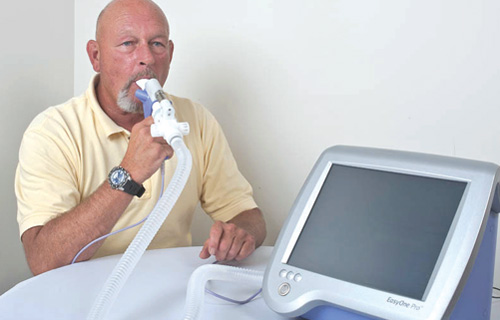 Spirometry loosely means the measurement of breath. It is one of the most recommended procedures for individuals suffering from pulmonary problems. Basically, it measures the lung functions in terms of the flow and volume of air that you inhale and exhale. The data is achieved from the test is referred to as pneumotachographs which are used in the diagnosis and assessment of certain conditions like bronchitis, asthma, emphysema, fibrosis, pulmonary fibrosis, and chronic obstructive pulmonary disease.

A spirometer aids in the whole process. It measures the volume of the air inspired and expired by the lungs. Besides, it also measures the movement of the inhaled and exhaled air through the lungs. There are many types of spirometers. Most of them are able to identify two kinds of ventilation pattern that may be an indicator of an abnormality in the lungs which are obstructive and restrictive.

The various kinds of spirometers employ varying methods of measuring airflow and volume. They include water gauge, pressure transducer, ultrasonic. A typical spirometer producers two kinds of graphs; the volume-time curve and the flow-volume loop.

Who should undergo the procedure?

Spirometry is not meant for every individual. It is for the following group of the population

Noteworthy is that children who are not able to comprehend the instructions during the test are not meant to take part in the procedure. In essence, the procedure works best for individuals above the age of six as they are best placed to comprehend instructions. The procedure is done without the employment of sedatives. The procedure typically produces a forced expiratory volume which tells the doctor the largest amount of air an individual can breathe out after breathing in as much air as possible. The patient is showing difficulty in breathing if the recordings are below normal.

There are numerous benefits of using spirometry. To begin with, it exercises your lungs thereby ensuring that it is in the right state of function all through. This is by measuring how well you’re your lungs is able to fill with air and assist in keeping your alveoli inflated. When your alveoli are kept inflated, the lungs exchange the respiratory gases more efficiently. When you follow instructions to the letter, experiencing spirometry benefits is easy. When using an incentive spirometer, you may not reach your goals initially, but that should not be a discouragement. Note that it takes some time to retrain your lungs. Continue using the spirometer to achieve the most out of the spirometry benefits. You may want to track your progress in your treatment journal to ensure consistency.

As helpful as it may seem, spirometry is marred by certain possible complications and risks. Even though it is generally safe, some patients often report dizziness and shortness of breath after the procedure. Individuals who have suffered from heart conditions like heart attack are not supposed to undergo the test since the test demands for significant effort on the part of the patient.

Generally, spirometry is one of the most useful procedures when determining pulmonary dysfunctions and other problems related to the lungs. Above is some useful information you can arm yourself with.